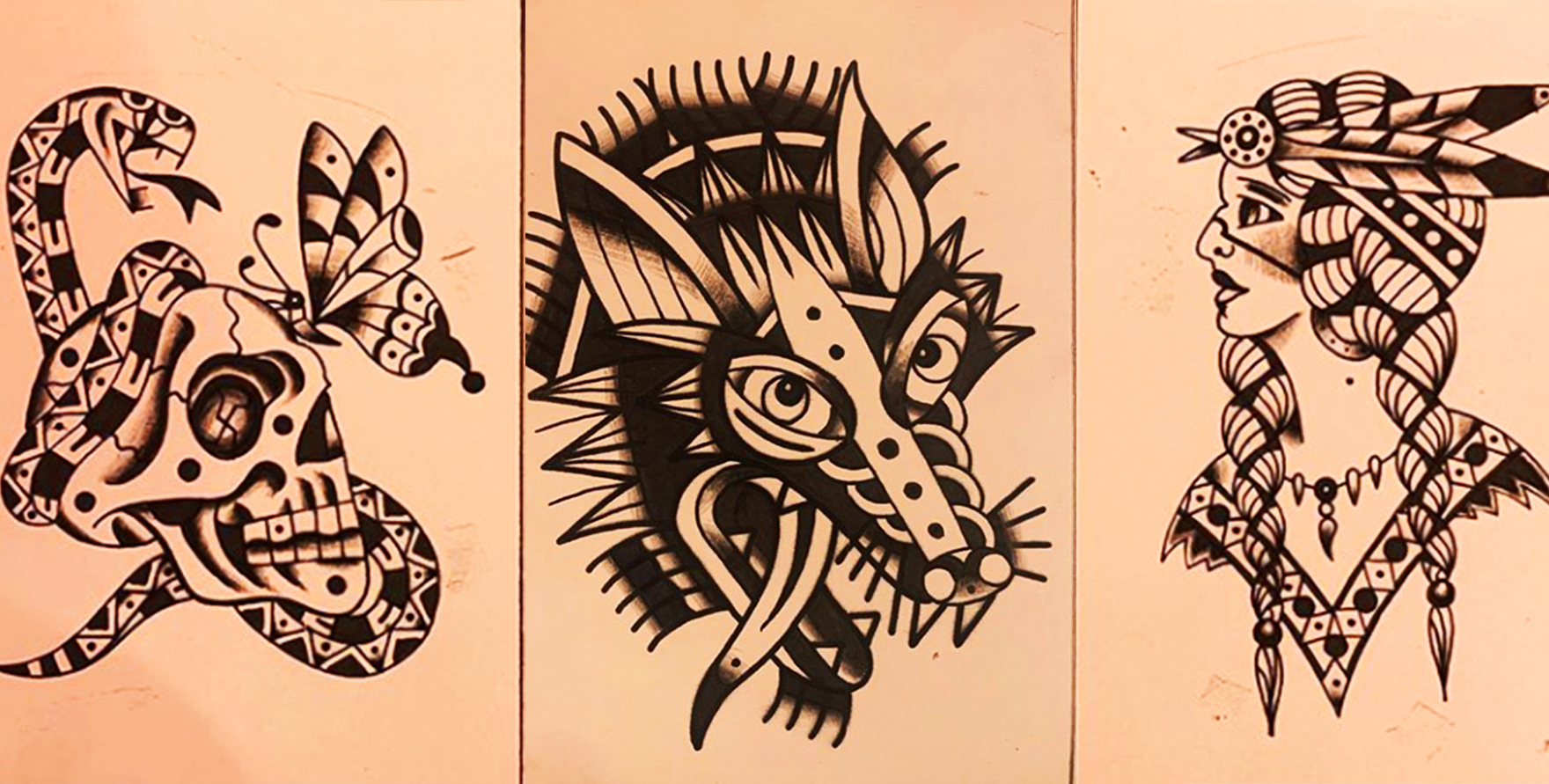 Every few weeks we interview an inspiring entrepreneur or artist chosen from our online network, Profiles. This week: Callum Aan.

The pink wall in Callum Bathgate’s (27) cozy studio is filled with his own illustrations. He used to design as many different tattoos as possible, but nowadays he almost exclusively designs in collaboration with his customers who mostly contact him through ‘dm’. Abiding by his own concept that a tattoo needs to look just as good twenty years from now and with Instagram as his digital shop window, Callum tries to distinguish himself in the tattoo world. 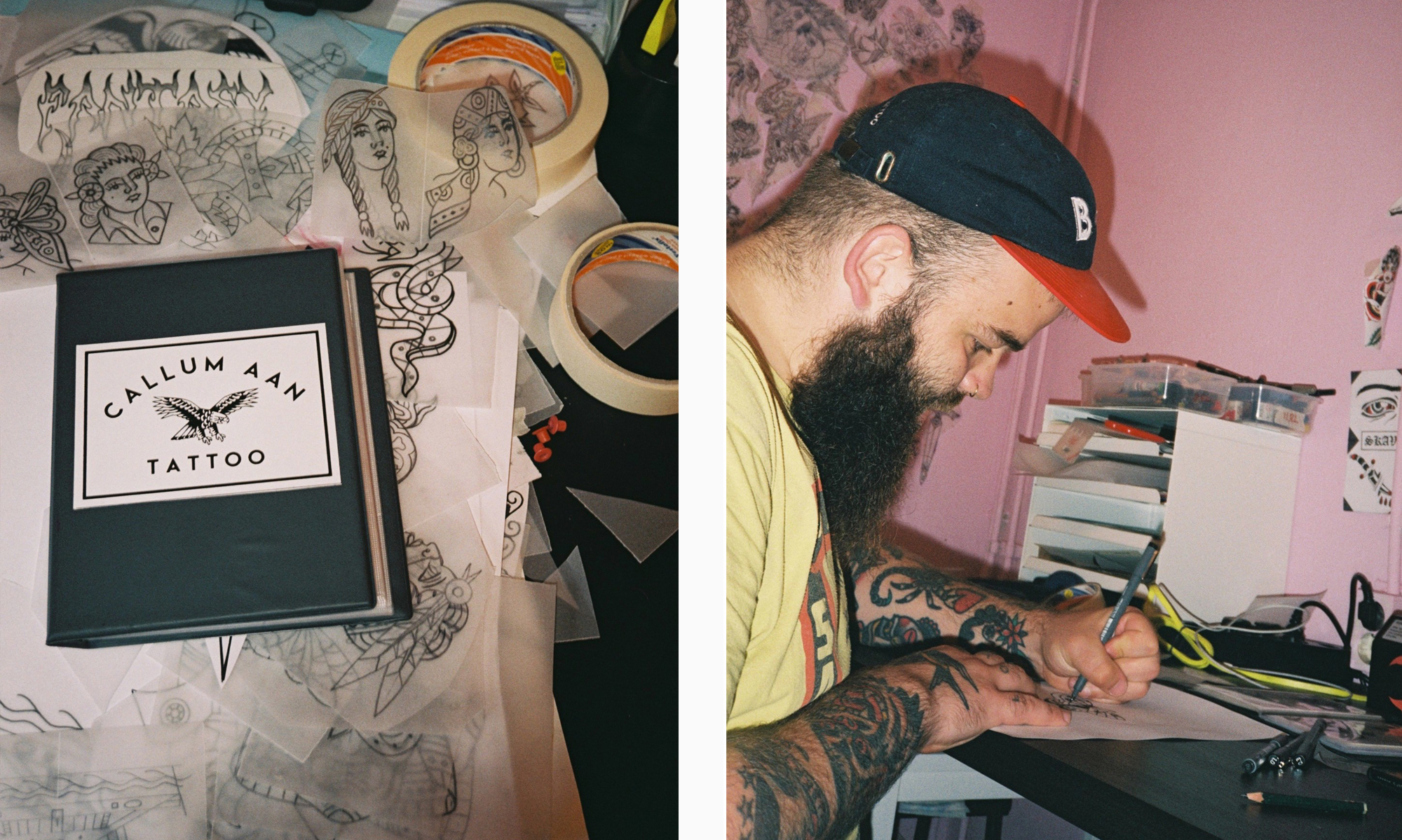 ‘Callum aan’ (Take it easy) is a clever pun. Does the name reflect your personality?

Well, there’s quite a story to that. I’m from Noord (Amsterdam-Noord) and my mom raised me with the English language. I grew up in Floradorp and if you were a bit different from the rest, you were screwed there. I used to always get teased, they’d say things like: “Callum aan!” which I thought was really annoying. Until I realised: if you can’t beat them, join them. And from that moment on even people that I liked called me ‘Callum aan’. At parties and in secondary school I grabbed every chance I could to dance like a madman in the moshpits. Everyone started to call me Callum aan, especially because it was so opposite to my nature. But these days I’m calmer, even at parties.

How would you describe your tattoo style?

Static, no frills. Minimalistic, but not simple.

Your tattoos also resemble the American Old School, do you agree?

That style of tattooing definitely inspires me. It’s a style that stays very visible through the years. A tattoo always looks different after ten or twenty years. Your skin is constantly attacking the ink, and that causes most tattoos to run. If you want to keep a tattoo looking good after that kind of period there are a couple of things you can do. By using thicker lines for instance there will be less detail in the tattoo, which will prevent it from running.

At the moment you’re tattooing solo instead of in a studio with other artists. Is there a reason for that?

I always worked in busy, touristy studio’s. People don’t really come in there especially for your work. I deliberately drew a lot of small pieces back then, to make the decision easier for people that came in and liked my work. People are more likely to chose a smaller tattoo. In the end I missed the recognition of people coming in especially in for my work. On the other hand tattooing alone also means you have to arrange everything yourself. From scheduling appointments to stock management.”

Have you ever rejected a request for a tattoo?

The number one reason for rejecting tattoo requests is the sustainability of the design. Yesterday there was this woman that wanted to have a design of a crawling panther reduced in size from 12 to 7 centimeters. The original design is very detailed and reducing the size would make me question it’s aesthetics in the long run. I believe you should always give your best work. So when people have a request that’s impossible, I turn it down. 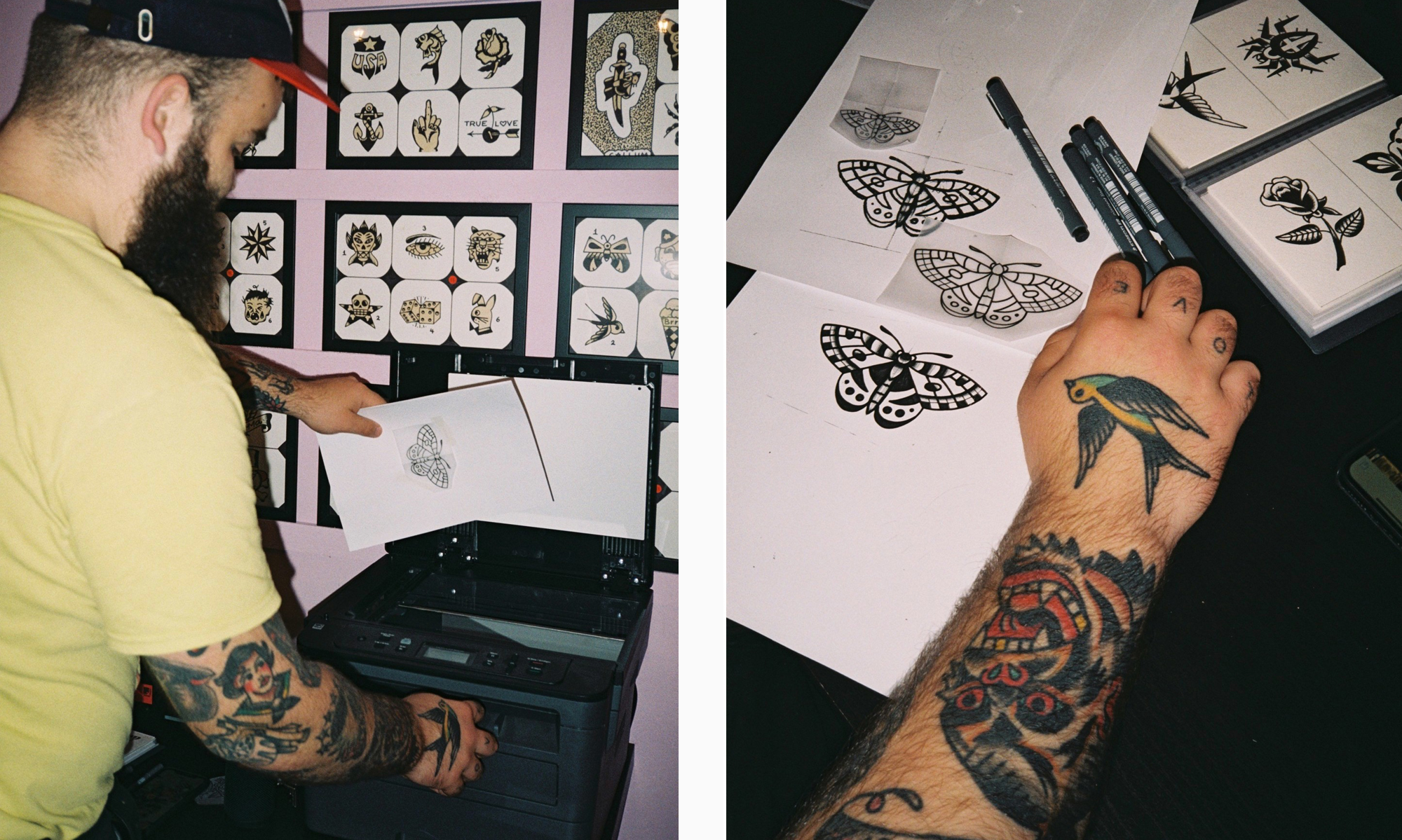 Tattoos are getting more mainstream. About ten years ago it was still a taboo to show tattooed skin at work, but now 31% of Dutch millennials has at least one. What’s your opinion on this development?

I think it’s cool that more people do what they like. I’m all for that. That’s also why more people are tattooing. For a while I worked in a shop with a guy named Gerry, he passed and he once told me: ‘The pie is getting bigger, but the pieces are getting smaller.’ He was one of the best tattoo artists in Amsterdam and he experienced the growth of the trade. On the other hand I think a lot of people only get a tattoo to fit in someplace.
The first time I was in Berlin, I fell so deeply in love with the city that I immediately thought – I should live here. But I instantly couldn’t imagine all of the millions of other people wouldn’t be thinking the same thing. And if we’d all move there, the city wouldn’t be the same city we fell in love with.

What does tattooing mean to you?

I think I can explain it best by telling you a little story. Me and my ex-girlfriend were at her friends house and she told her friend that I’m a tattoo artist. And her friend reacted by saying: “Gross!” But in a way that made me happy. I thought: yes, it’s still there. That friend was ashamed for her quick reaction, but I didn’t mind at all. I embraced it. A month later I tattooed her.

What’s the future for tattooing?

Some say in a couple of decades robots will do all tattoos and we will be redundant. I try to stay focussed on tattoos that will keep looking good over the years. The individual artist is much more visible online. Maybe people eventually will get a tattoo of a specific artist just like they buy a painting by a specific painter.

What are you proud of?

I’m really proud. I’m one of the proudest people I know, haha. I’m my own biggest fan. There was this moment during my youth in Noord, when everything seemed to go wrong and someone at this institution said to me: “Don’t let me see you here again, okay?”, that was the day I started to try and make something of my life.

What’s your definition of success?

Despite of that proud feeling, I never have a feeling of success. I find it hard to determine if something is successful or not. For instance: a tattoo has to be perfect, but it’s handmade. It can always be better. I think I’m satisfied when I can tell myself I always made the best of it.

View all news items ->
February 2, 2023
01 Payments to private individuals 
Just when you’ve mastered the art of invoicing to other entrepreneurs, a new situation suddenly arises: hav...
January 24, 2023
02 Tom Chung – industrial designer
A peek inside Tom Chung's studio! We talked about his passion, entrepreneurship and the future.
January 20, 2023
03 Most important changes for self-employed professionals in 2023
With effect from January 1st 2023, several tax rules for self-employed professionals have changed. It’s imp...
View all news items ->